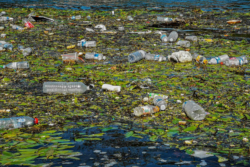 Why Is Single-Use Plastic Bad?
Single-use plastics are a glaring example of the problems with throwaway culture. Instead of investing in quality goods that will last, we often prioritize convenience over durability and consideration of long-term impacts. Our reliance on these plastics means we are accumulating waste at a staggering rate. We produce 300 million tons of plastic each year worldwide, half of which is for single-use items. That’s nearly equivalent to the weight of the entire human population.

Reducing plastic use is the most effective means of avoiding this waste (and the impacts linked to plastic production and use). Carrying reusable bags and bottles is one great way to avoid single-use plastics in our day-to-day lives; more on preventing plastic waste can be found below.

Recycling more plastic, more frequently, reduces its footprint. Polyethylene terephthalate, one of the most commonly recycled plastics and the material that makes up most water and soda bottles, can be turned into everything from polyester fabric to automotive parts. But a whopping 91 percent of all plastic isn’t recycled at all. Instead it ends up in landfills or in the environment. Single-use plastics in particular—especially small items like straws, bags, and cutlery—are traditionally hard to recycle because they fall into the crevices of recycling machinery and therefore are often not accepted by recycling centers.

Left alone, plastics don’t really break down; they just break up. Over time, sun and heat slowly turn plastics into smaller and smaller pieces until they eventually become what are known as microplastics. These microscopic plastic fragments, no more than 5 millimeters long, are hard to detect—and are just about everywhere. Some microplastics are even small by design, like the microbeads used in facial scrubs or the microfibers in polyester clothing. They end up in the water, eaten by wildlife, and inside our bodies. They’ve even made their way up to the secluded Pyrenees mountain range and down to the bottom of the Mariana Trench. For wildlife, microplastics can be particularly dangerous; when eaten they can easily accumulate inside an animal’s body and cause health issues, like punctured organs or fatal intestinal blockages.

Exposure to microplastics, as well as the chemicals that are added to plastics during processing, harm our health. Many of the chemicals in plastics are known endocrine disruptors,and research has suggested that human exposure could cause health impacts including hormonal imbalances, reproductive problems like infertility, and even cancer. The phthalate DEHP, as just one example from dozens, is often added to plastic goods like shower curtains and garden hoses to make them more flexible—but was also found to be a probable human carcinogen by the U.S.

Congratulations to Jeff Bridges for receiving the Cecil B. DeMille Award at the Golden Globe Awards

Kudos to him for giving a shout out to creating a healthy planet at his acceptance speech. He is not only a great actor but a real champion for the fight against plastic pollution.

This guy walks the walk. His contracts specify in the rider that no plastic bottles are to be used on his sets or stages and when he;s playing with his band, they all use metal or non-plastic containers for drinking. You don’t have to be a movie star to develop environmental friendly habits. Here he is lending his voice to a video from the Plastic Pollution Coalition